Supporting Students: as a Teacher, Volunteer, and Donor

By Development and Alumni Engagement on June 3, 2013 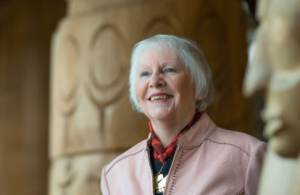 “I cannot imagine what life would have been like without UBC,” says Thelma Sharp Cook, professor emerita in the Faculty of Education. “It’s allowed me to contribute in ways I never imagined.”

Since graduating from UBC’s first teaching class in secondary education in 1958, Thelma has demonstrated an overwhelming compassion for young people striving to better themselves through education. Her ongoing efforts as a volunteer and donor have opened doors for countless students.

“NITEP (Native Indian Teacher Education Program) began in 1974 as a response to needs expressed by Aboriginal people for a more relevant education program,” explains Thelma. In 1977, she was second director of NITEP and had taken on the role of raising scholarship and bursary money for native students.

“These students were making a significant change in their lives by leaving their communities to continue their education,” says Thelma. “And it was almost impossible for a First Nations student to come to an institution like UBC without assistance.”

When Thelma couldn’t find anyone to sponsor a graduation award, she demonstrated passionate belief in the cause and established the Sharp Family NITEP Graduation Prize.

Thelma was also instrumental in the creation of the Wesbrook Scholars Group. “I was chair of Senate Awards Committee, and we recognized the need for an award that looked beyond academic achievement, so we established Wesbrook Scholars.”

After being recruited as a selector for the Wesbrook Scholars, Thelma became increasingly immersed in fundraising work for undergraduate awards and bursaries. “When I saw that that I could put some money towards a scholarship, I thought I might as well,” says Thelma. She went on to establish the Thelma Sharp Cook Scholarship, which recognizes qualities like leadership, athletic achievement, and volunteer work—as well as academic standing.

Thelma and her husband also recently announced their intention to bestow UBC with a legacy gift, although the designation has yet to be decided.

When asked about her generosity, Thelma responds, “I just hope it makes life a little easier for students and allows them to spend time learning things outside of class, whether it’s playing on an athletic team or volunteering in one of the hospitals.”

Even though she’s retired, Thelma remains an inspirational presence at UBC. Besides serving on Dean Blye Frank’s External Advisory Board for the Faculty of Education, she still takes classes (for credit) and volunteers at graduation. Her philanthropic spirit recently earned her the rare privilege of hefting the UBC mace—a gesture heavy in more than symbolism, since the mace weighs about 40 pounds.

“The experiences, the opportunities, the friends I have seen over 60 years all have a UBC connection,” says Thelma. “To be an academic and share ideas with people from all over the world—who could have imagined that as a kid? The fun it’s all been.