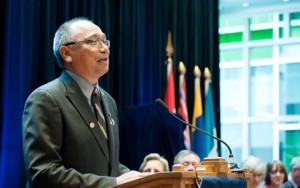 The University of British Columbia will honour advocates who have fought for human rights and the environment at this year’s spring graduation ceremonies. The Honourable Steven Point, Tzeporah Berman, Lee Lakeman, and Ian Stirling will receive honorary degrees from UBC’s Vancouver campus.

UBC awards honorary degrees in recognition of substantial contributions to society at the provincial, national or international levels. The four recipients will receive their degrees during the spring congregations ceremonies, held May 22 -29.

Tzeporah Berman, an influential leader and activist in environmental movements, is credited for helping save over 12 million acres of endangered Canadian forests, including the Great Bear Rainforest and Clayoquot Sound. More recently, she has focused on climate change.

Lee Lakeman is recognized nationally and internationally for combating violence against women and advocating for women’s rights. She founded the Woodstock Women’s Emergency Centre in the 1970s and began working with Vancouver Rape Relief and Women’s Shelter in 1978. She has helped establish transition houses in Japan, Indonesia, Russia, India, Nepal, and Bangladesh.

The Hon. Steven Point, the former Lieutenant Governor of B.C., is a leading advocate for equality, culture and human rights. The UBC law alumnus was the Chief of the Skowkale First Nation for 15 years and served as Tribal Chair of the Stó:lō Nation. Appointed a judge in 1999, Point is recognized for encouraging greater acknowledgement of the contributions made by First Nations people and for his work to inspire young people. He currently chairs the advisory committee on the safety and security of vulnerable women.

Ian Stirling, expert on marine mammals in the Arctic and Antarctic, is renowned for studying the plight of the polar bear. The UBC alumnus documented how climate change has affected the habitat of Hudson Bay polar bears. Stirling trained a generation of researchers, creating a lineage of scientific expertise to serve Canada and the world.

UBC’s Okanagan campus holds its graduation ceremonies June 6 -7 and will announce its honorary degree recipients in the coming weeks.