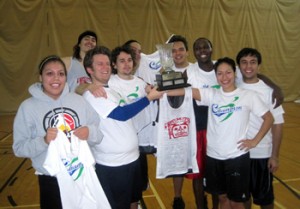 Congratulations to the FNHL Fusion basketball team who took home the Nitobe Cup last weekend in the UBC Rec Tier 2 CoRec Basketball League. It was a nail biter at times but the team came through and won the championship game with a healthy lead, defeating the only undefeated team in the league.

The team thanks the First Nations House of Learning, especially outreach coordinator Ryanne James, for their support throughout the season. Team Captain Rupert Richardson also wants to acknowledge all the players who came out: “The team came together and ‘fused’ it was great experience to be apart of. We really supported one another and grew closer week after week.” Everyone is looking forward to next semester and the Hall of Fame Banquet in April.

FNHL Fusion is part of the Longhouse Sport and Social Club which formed this year to provide an opportunity for Aboriginal students and friends to connect with the Longhouse Community through sport and social activities. There are UBC CoRec teams in basketball, soccer, and flag football and White Crane Kung Fu classes will be starting soon. If you’re interested in getting involved, email fnhloutreach@exchange.ubc.ca or visit the club’s facebook page.