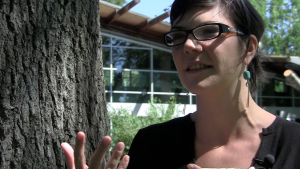 In June of this year, Lauren Redman graduated with a Bachelor of Arts in Women’s and Gender Studies at the University of British Columbia. Redman, who is a Metis student from Selkirk, Manitoba, was not always so sure of the direction she wanted to take with her studies.

After taking some courses at Langara College, Lauren decided that she wanted to finish her Bachelor’s degree, and UBC was a logical choice. While Redman was drawn to UBC for a variety of reasons, she notes that it was important to her to attend a university with an active First Nations community. By visiting the Longhouse, Redman was able to become involved with Aboriginal cultural activities and network with a variety of individuals who are involved with First Nations initiatives around campus.

Recalling her early days as a student at UBC, Redman says that the university can be scary at first. Lauren, who came to UBC’s Vancouver campus in 2008, initially found the campus to be quite large and there were many unfamiliar faces. However, by getting involved with a variety of initiatives around campus, many of which she was able to access through the Longhouse, Redman soon began to feel comfortable on campus. She notes that she enjoyed attending Longhouse luncheons, which are offered regularly and open to all students. These lunchtime get-togethers proved an invaluable resource for meeting other Aboriginal students around campus and finding out about groups, clubs and events to get involved with.

What’s in store for Lauren now that she has graduated? In addition to getting acquainted with her new role with Aboriginal Student Affairs (ASA) as a peer advisor, Redman is also starting the midwifery program at UBC this fall. Redman’s decision to apply to the midwifery program was, in part, encouraged by a work study placement that she held with the Division of Aboriginal Peoples Health while completing her degree in Women’s and Gender Studies.

When asked if she had any advice for new, incoming students, Lauren stressed the importance of getting involved. By joining groups with similar interests, visiting the Longhouse and getting to know the people there, and volunteering, students are able to make connections and begin to feel more comfortable in a new environment. These connections may also prove to be instrumental in providing guidance and helping students to find direction and decide where it is that they want to go with their degrees.