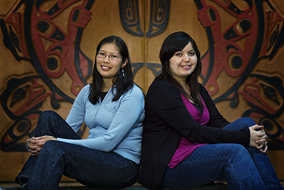 Magnolia Unka and Sita-Rani MacMillan want to improve the lives of Aboriginal people in Canada: they’re just going about it in different ways. One plans to use the court room, the other, the classroom.

“Growing up, I was always aware of the injustices that Native people faced within the legal system,” says Unka, a member of the Northwest Territories’ Dene First Nation. “I entered law to address these injustices and improve the system from within.”

“I would like to work as an elementary school teacher,” says MacMillan, a member of Saskatchewan’s Sakimay First Nation. “We begin teaching classes in our first year so we are really comfortable and ready to teach full-time in the classroom by our final year.”

Over the past three decades, UBC has introduced a wide variety of Aboriginal academic programs, research projects, student services and community outreach projects. These include initiatives in Arts, Education, Forestry, Land and Food Systems, Law, Medicine, Science, and the Sauder School of Business, plus more than 100 courses with an Aboriginal focus. UBC’s Trek 2010 vision statement pledges ongoing improvements to UBC’s accessibility to Aboriginal people and its ability to meet their educational needs.

When Unka and MacMillan want to connect with other Aboriginal students, staff and faculty at UBC, they visit the First Nations Longhouse. A recipient of the Governor-General’s award for architecture, the Longhouse serves as a “home away from home” where students can study and learn in a surrounding that reflects Aboriginal traditions and cultures.

“I am honoured every time I step foot in it,” says Unka of the Longhouse, which includes a Great Hall, Xwi7xwa Library, a computer lab, counselling, advising, and other student resources. It houses the UBC First Nations Student Association and a variety youth programs aimed at burgeoning Aboriginal leaders and scientists.

Inspired by a number of female Aboriginal lawyers, Unka says she is proud to be following their footsteps at UBC. “A Cherokee elder once said: ‘The battle for Indian children will be won in the classroom, not on the streets or on horses. The students of today are our warriors of tomorrow.’ To me, that really sums up the importance of Aboriginal students in university.”

“I have never doubted that NITEP was the right program for me,” says MacMillan. “It has helped guide me towards a very positive future. I just hope to give back as much as has been given to me.”