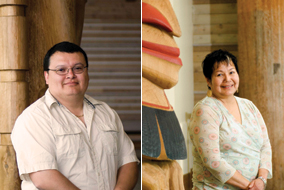 For aspiring entrepreneur Vivian Bomberry, the irony of the term cohort — used in education circles to define a group of students in the same class year — wasn’t lost when she began her studies in the Ch’nook Advanced Management Program at UBC last November.

“When I heard the word, I didn’t know what it meant,” said Bomberry, speaking of the first gathering of students in the program, which is geared to future First Nations business leaders. “I looked it up and found the definition: Band of warriors. Well, that was us!”

Seven months after her foray into coursework devoted to marketing, finance, business strategy and operations, Bomberry would be one of twelve students to complete the Aboriginal business program in its inaugural year. Originally from the Six Nations Band in Ontario, she now resides in Surrey, B.C., where she is focused on starting her own jewelry business.

According to Ch’nook advisor Chief David Walkem of Cook’s Ferry Indian Band, expectations for the inaugural 2006-2007 program were high. “Our goal as we developed the certificate program was to create the best Aboriginal business education program ever offered,” he said, emphasizing the curriculum would need a vigorous mix of top-flight Aboriginal leadership and coaching with relevant content and the best instruction available. “We can now say with confidence that the ‘best ever’ goal is being met.”

Program leaders are hoping to make an impact on the future of economic development for First Nations.

“It is very clear to the First Nations Leadership Council that focusing on economic development by itself does not pave the road to self-reliance,” said Grand Chief Ed John, who spoke at the Ch’nook program graduation in June. “However, when economic development is combined with strong business management education, then we have the equation that equals Aboriginal success.”

Unlike traditional business education programs, this one integrates the insights of Aboriginal leaders in a setting that its participants can easily relate to. Visitors to the program include business and finance firms such as Odlum Brown, Tale’awtxw Aboriginal Capital Corporation, VanCity and Kryton Group.

“We looked for other Aboriginal-focused programs and found nothing close to this in terms of either the blend of Aboriginal focus and business, or program length,” says program director and Sauder School of Business professor emeritus John Claxton. “The program is intense. There are a lot of new ideas, lots of group work and a challenging team project. But it is absolutely worth the effort. The classes were always a great mixture of enthusiasm, effort and fun.”

“This has been one of the real highlights of my UBC career — and now we’re all looking forward to November and the next cohort.”

The Ch’nook programs are a collaborative effort between UBC First Nations House of Learning and the Sauder School of Business at UBC, and include business diploma and degree options and scholarships. The Ch’nook name is a variation on the word Chinook, which was the local jargon language used for trade between First Nations, particularly up and down the West Coast.

In addition to its Advanced Management Executive Education Program, the Ch’nook initiative at UBC is home to the Ch’nook Scholars Program — supporting full-time business diploma and degree studies for First Nations students in British Columbia. The four major components of this program are financial support, Aboriginal-focused coursework, career mentoring and internships.

This summer, Ch’nook student Jarnael Payer — a student of Langara College in Vancouver — is cutting his teeth with one of Canada’s oldest independent investment management firms — Phillips, Hager & North, which manages over $65 billion in financial assets. Jarnael’s internship with PHN involves conducting research devoted to investments on the New York Stock Exchange. In addition, he’ll have the chance to experience the workings of a fast-paced investment firm.